One of the most important museums of the island is the “Museum Fragoulidi” and it is built near the church of Panagia in the village Agros. The museum was founded in 2004 to honor Solomos Fragoulidis who was one of the greater representatives of the first generation of Cypriot artists. He is also considered a pioneer painter and hagiographer. The love between the painter and the habitants of the village was mutual and it grew during the stay of Fragoulidis in Agros from 1932 to 1934. The painter writes in his biography: “Concerning my painting, the two years I have spent in Agros, were the happiest of my entire life. I felt loved by the people here…”. The village returned this love by building the museum in his memory. His work has both an artistic and religious value. He was the hagiographer who undertook the painting of all the portable icons of the church of Panagia. The idea for the foundation of the museum belongs to Solon Papachristodoulou who was actually the god child of the painter as well as his only heir. He inherited all his fortune, reports, patterns, unfinished paintings, paintings, several materials and accessories for painting but also his rich record. Fragoulidis explains in his biography how he met Solon. He says that a young couple asked him to become the best man at their wedding and then christen their child. And he did so. He also decided to name the baby after his own name, Solon. Solonas in corporation with the “Association of Farmers and Friends of Agros”, the members of the Executive Council and the help of the entire village organized the museum. The building was donated by the church. The money for the completion of this museum came from two sources: loans and donations. Below we will mention the people who contributed for the organization and embellishment of the museum: the architects Crysanthos Pissaridis and Elena Kalliri, the museologist Manolis Kamassa, the conservator of works of art Glafkos Efstathiou, the building constructor Andreas A. Tsolakis, the civil engineer Andreas A. Tsolakis and finally the owners of the Gallery “Kiklades” Marios and Leonidas Tilemachou. The museum is without a doubt a treasure for the village and it is something that every visitor should meet. Reference: Community Council of Agros Brochure concerning the museum and the biography of Solonas Fragoulidis

The Olive-mill of the Church of Agios Ioannis Prodromos in Agros: 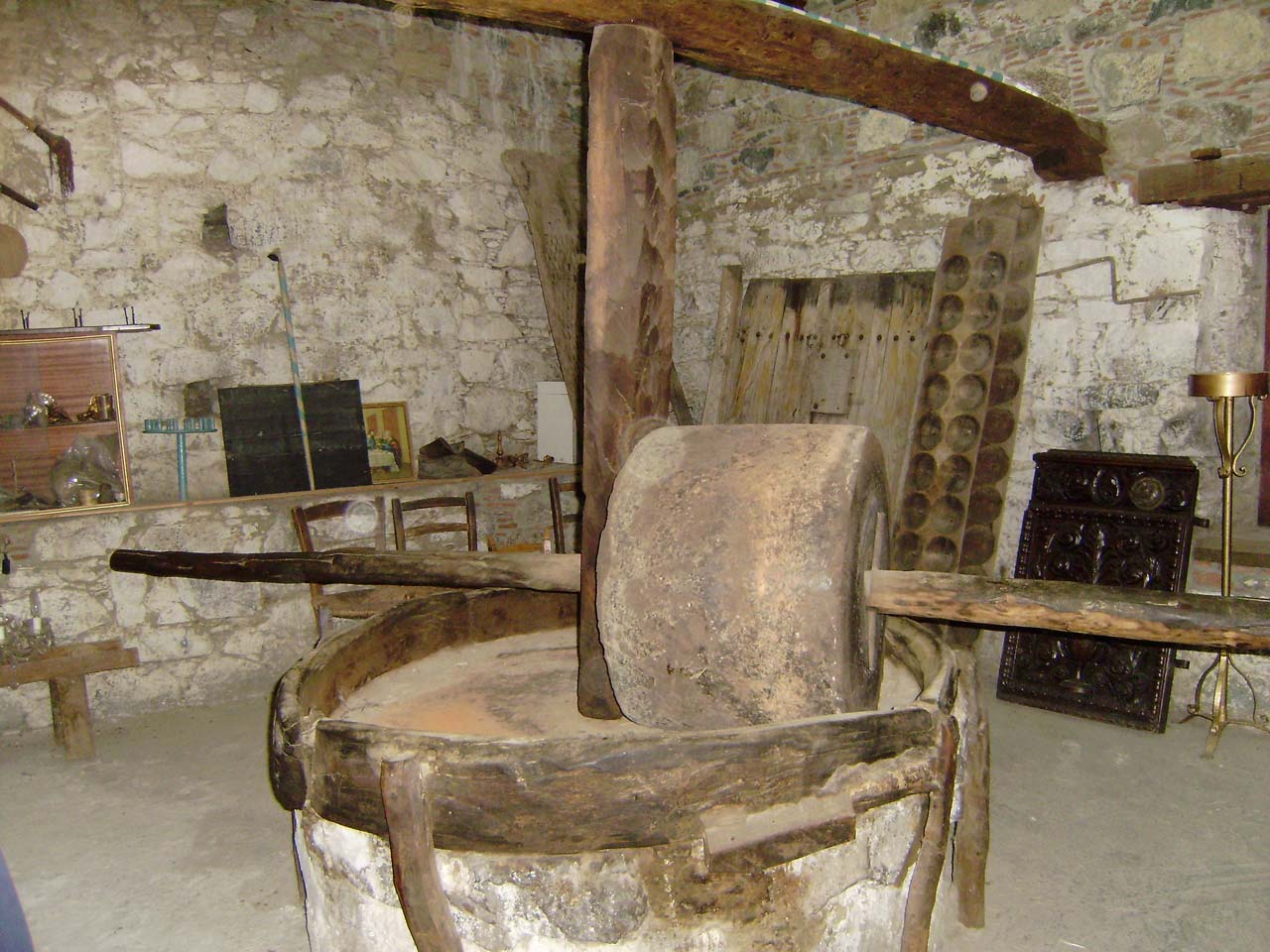 In 1930, the olive-mill of the parish of Pera Geitonia was transferred from the underground floor of the Virgins’ School of Agros to the traditional building that is housed today, next to the church of Agios Ioannis Prodromos. This manually-operated system, with which olive producers would get their olive-oil, is in a good condition. There is a presser, a mill, knits with holes in the middles called “zempilia” and other tools and objects which all together form a small Popular Art Museum. The building is made of stone and wood and its roof is made of tiles. The entire project was completed with the guidance of the Department of Antiquities.

A similar olive-mill for the parishioners of Panagia of Agros existed until 1949 next to the fountain of “Kaouras”. It was dismantled because of the creation of the electric generator of Vrasidas Eirinarchos and was transferred at a place between the Church of Panagia and the Primary School, where the mill stones still exist.

Byzantine Chapel – Museum of the Monastery of Megas Agros :

The destruction of the historic Monastery of Megas Agros, which according to tradition had been built by monks who had come from Kyziko of Asia Minor during the period of iconoclasm, occurred in 1894. The present church of Panagia Eleousa of Agros was built in its place.

Based on the descriptions of the Monastery, a chapel- Museum was rebuilt, in which the iconostasis, the Despotic Icons of the 12th century, old books and any other objects that had been preserved from the destroyed Monastery, were placed in it. In the churchyard, the Department of Antiquities discovered not only architectural remains, but also a few samples from the Monastery’s hagiographies because its walls had been completely covered with them, as well as many hamose tiles which were used to cover the wooden roofs of the Troodos churches.